Located in the heart of Seminyak, just minutes away from the beach and behind the renowned Oberoi Hotel in Bali. Villa Cocogroove, one of our premier luxury Bali rentals, is a privately owned modern minimalist style vacation villa. This private vacation rental villa, completed in 2004 and with a total built-up area of 550 square meters.

Villa Cocogroove was conceived as a series of bales (the Balinese version of a gazebo) linked by a covered walkway and orientated to take advantage of the prevailing winds, using large cantilevered overhangs and plated pergolas for shade and protection from rain. Architect Ian Chee has designed a complex that creates entirely its own habitat within the surrounding walls, resulting in lavish exclusion shared by only the most private luxury villas. Seminyak authentic flavor was still retained, as Chee’s intention was to re-interpret the traditional Balinese layout of a dwelling. In this, there is a series of small construction grouped in the same compound, with a minimum of five areas: entrance, bedroom kitchen, bathroom, and granary. The precise layout varies according to status and caste, and follows rules laid down in treatises, some going back to the fifteenth century. Masonry platforms are traditional, as is the interpenetration of interior and exterior space.

By adapting the arrangement of a traditional Bali home, the architect was able to satisfy the client’s wish to keep the guest quarters separate, and these were located in a line extending from the corner housing the kitchen, service quarters and garage. The living shelter followed by the master room extends from this corner at a right angle, while the house temple was placed facing the sacred mountain Gunung Agung in the opposite corner of the compound. Enchanting can easily be used to describe this private luxury villa. One entire wall of the compound is lined by plantings of small trees. The water connects the living area at firth with the bathrooms that adjoin the master and second bedrooms. The focus of the house is the living shelter, roofed but open on three sides. In the centre of this is the sunken seating area, into which steps lead down from two opposite corner. Early morning sunlight streams into the living shelter (overleaf), with its dining table at left. The area faces out on to the lawn, swimming pool and a small bale in traditional style, thatched with alang-alang grass. 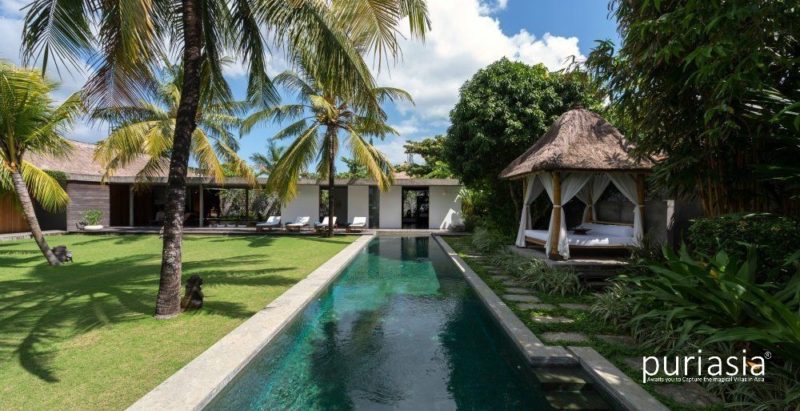 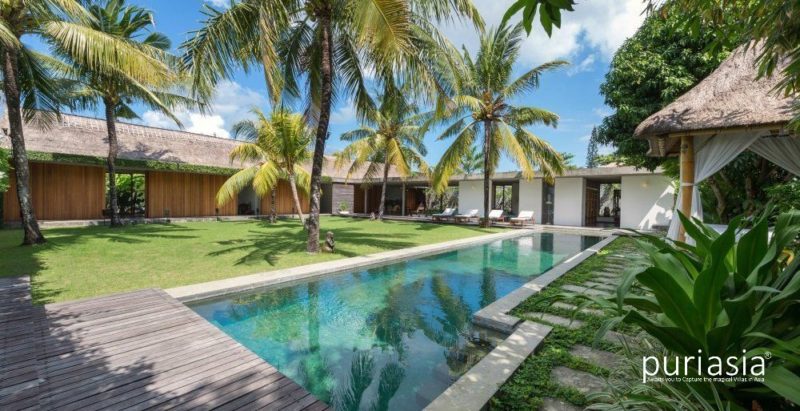 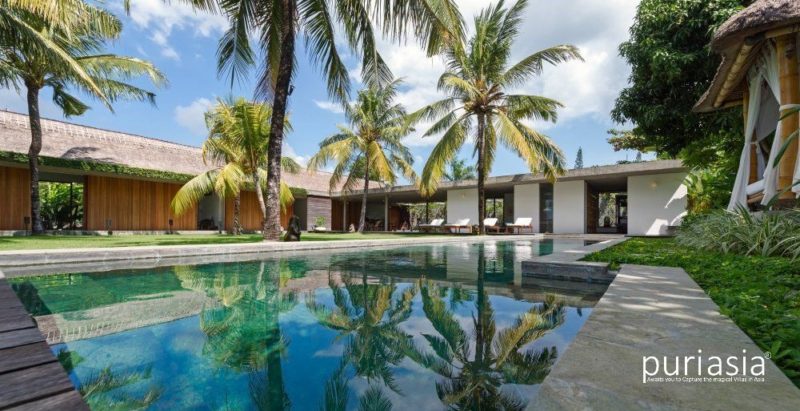 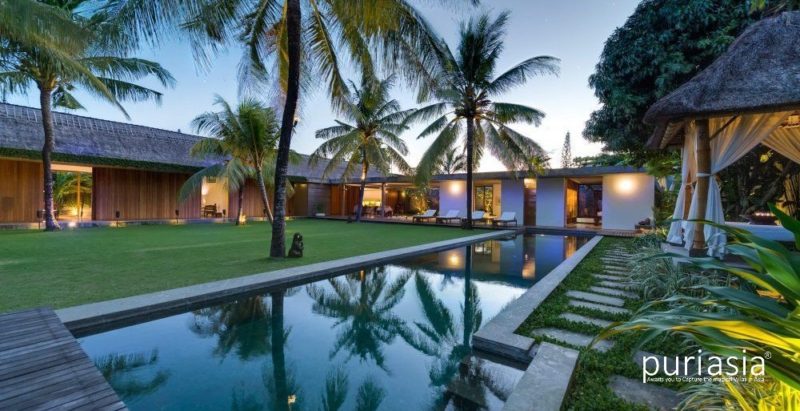 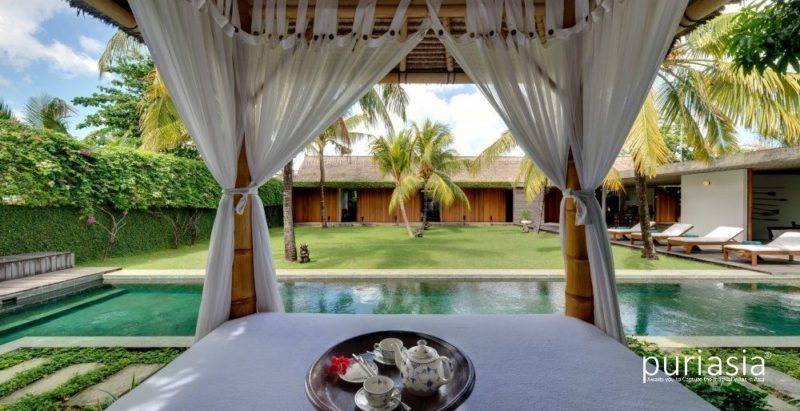 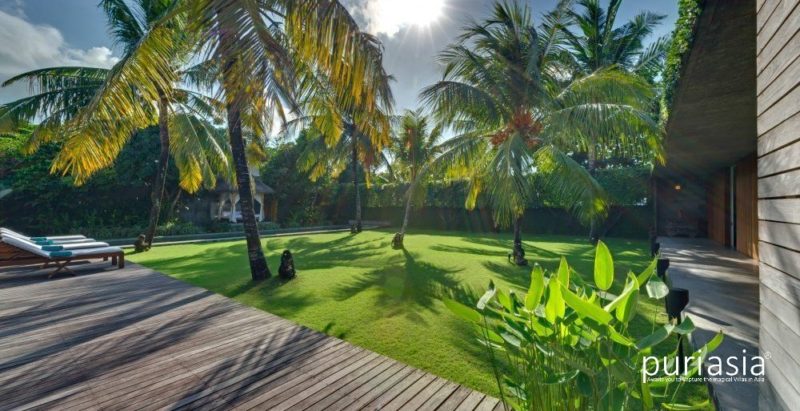 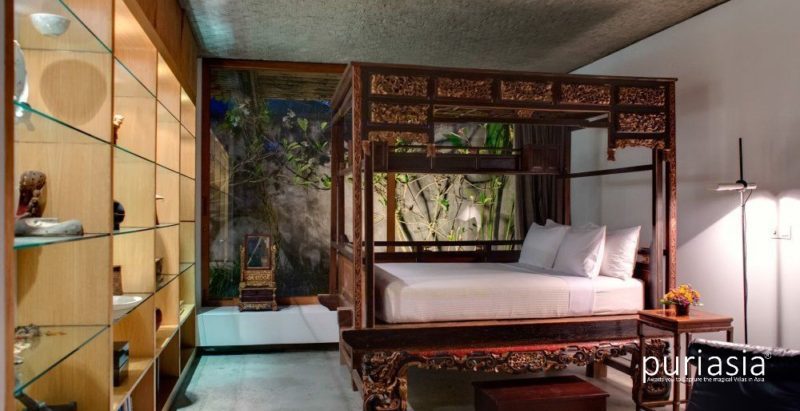 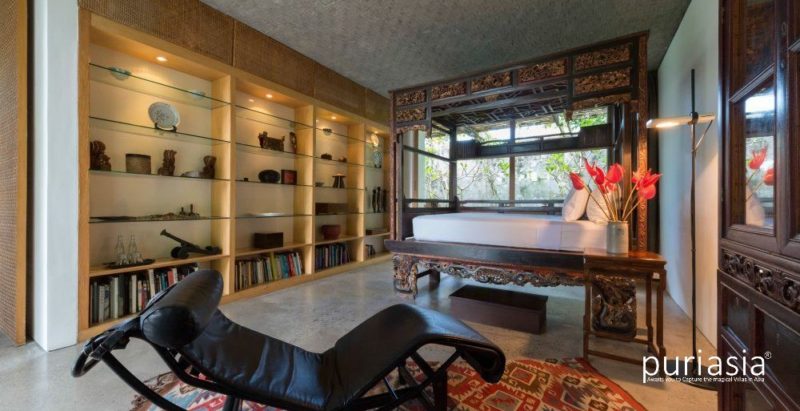 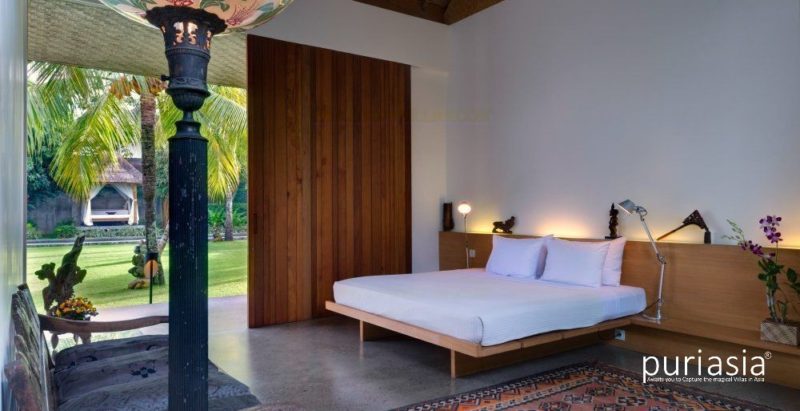 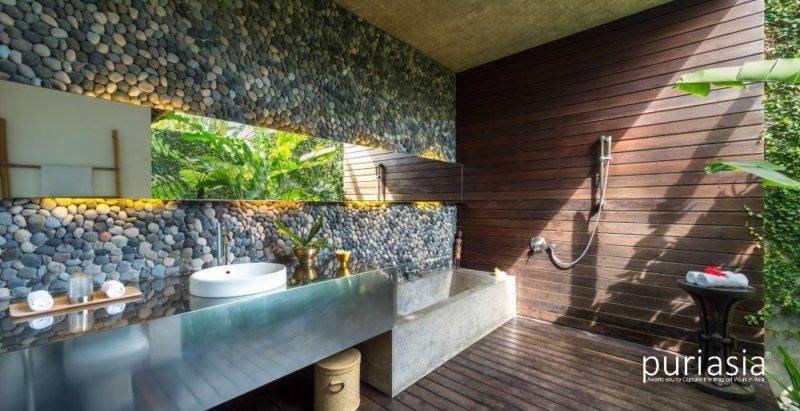 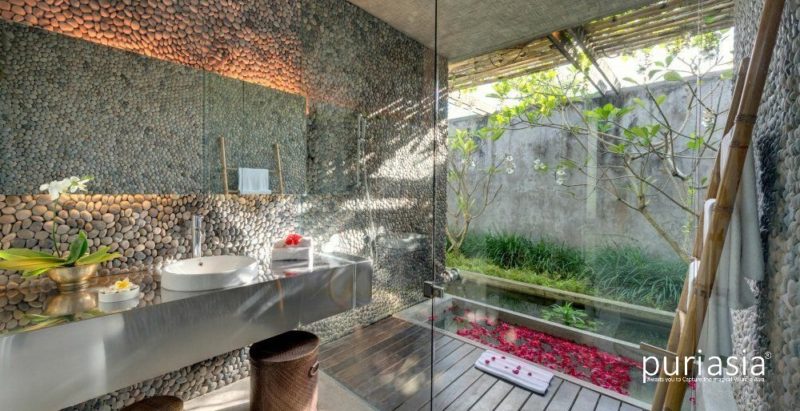 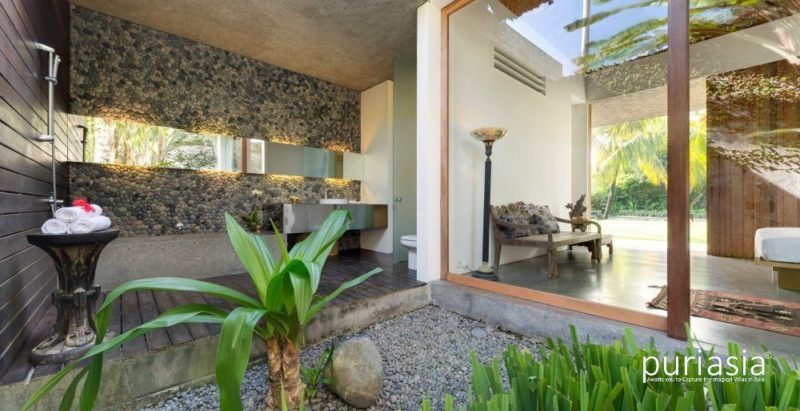 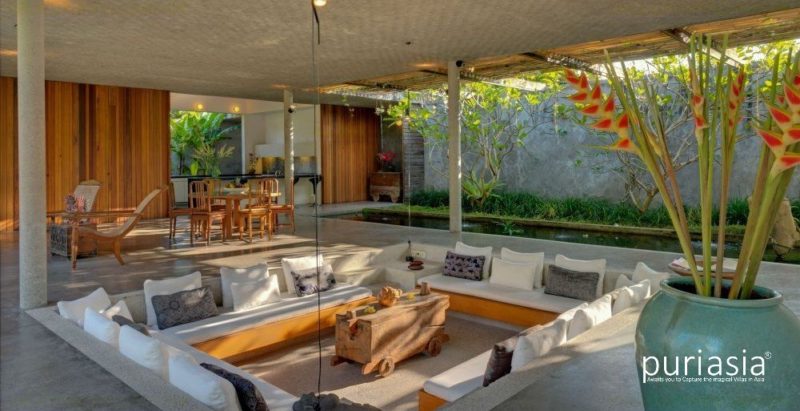 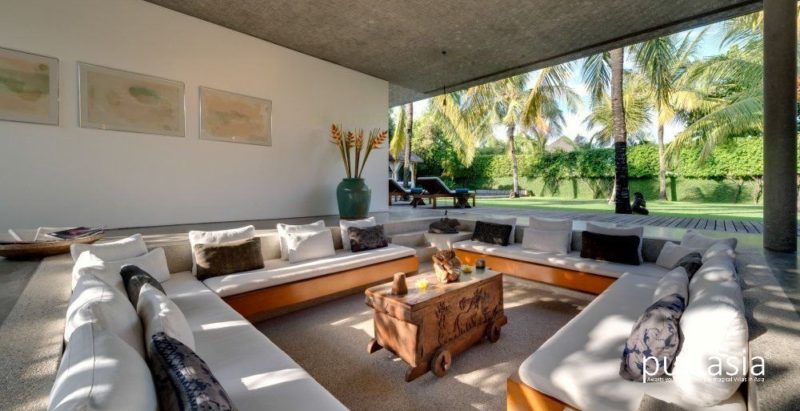 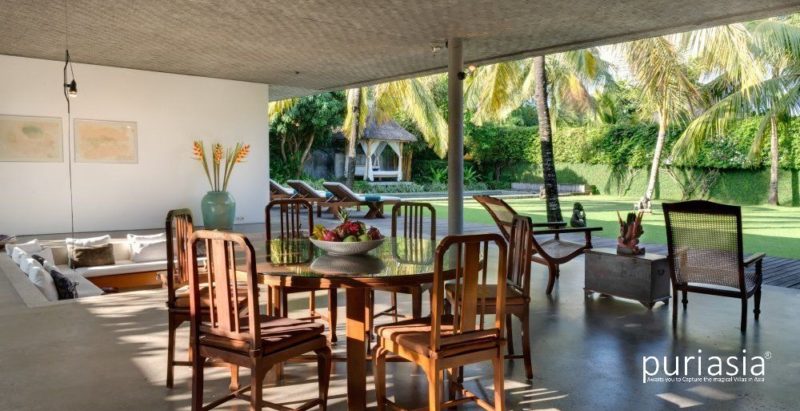 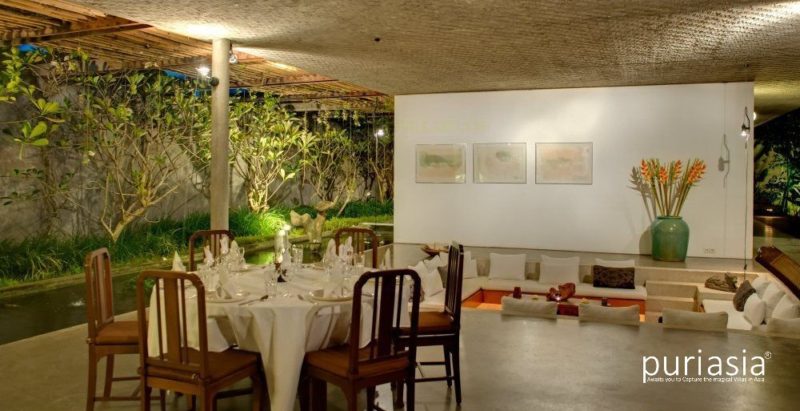 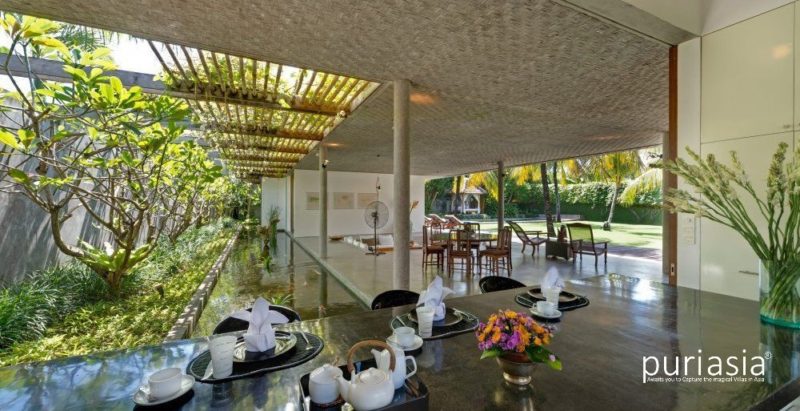 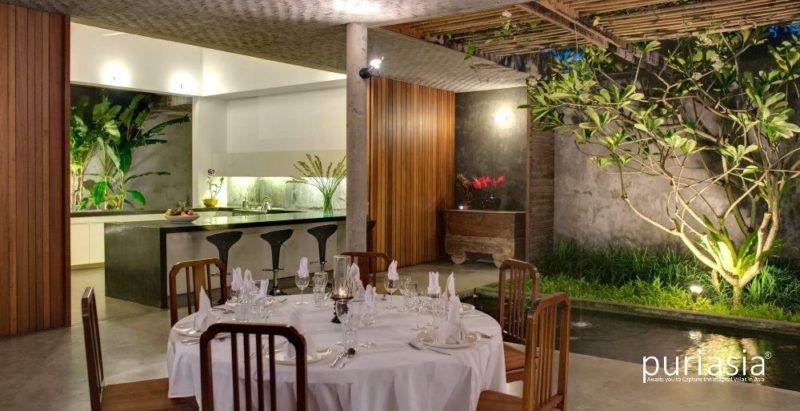 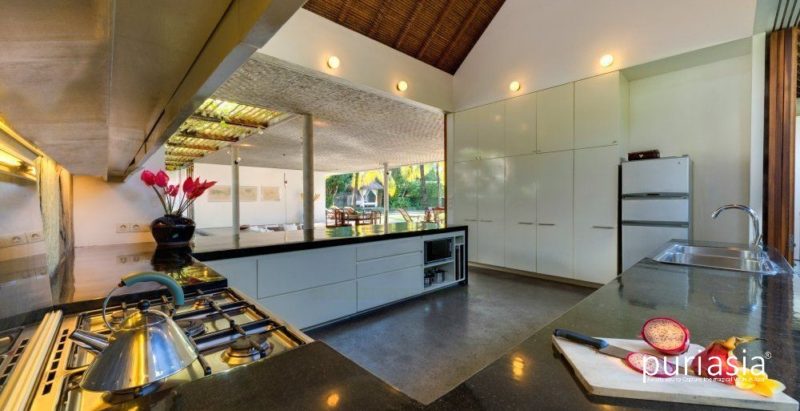 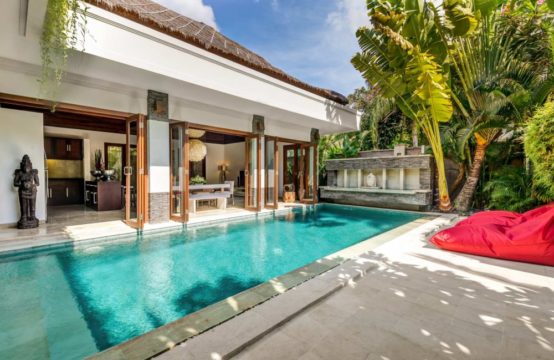 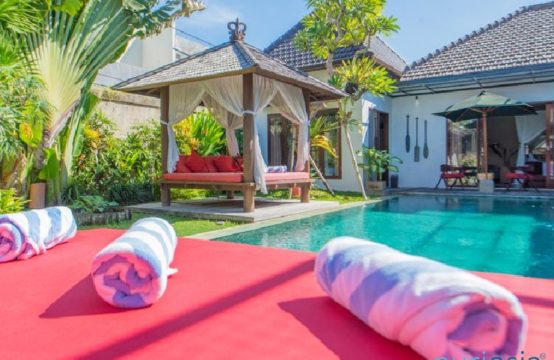 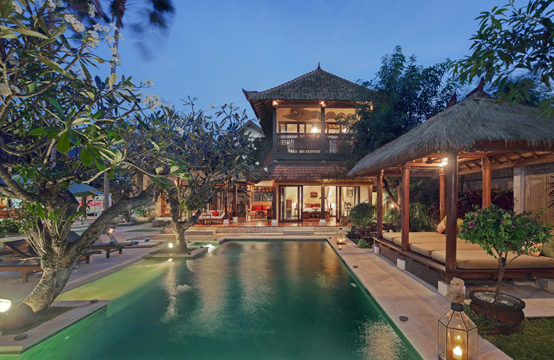